Several years ago, I had heard in various bars in the Byward Market that the Canadian government under Stephen Harper had engaged in a serious Lessons Learned exercise about Afghanistan.  I heard that the document was buried (I used the last scene of Raiders of the Lost Ark to illustrate).  I tried an Access to Information Request in January of 2013, but got rejected because the document was viewed as “advice to cabinet” and containing sensitive information about Canada’s allies.  I thought this was hogwash, so I appealed.  I got the document just before my recent trip to Brazil (here it is),* so I didn’t have time to process it.

END_OF_DOCUMENT_TOKEN_TO_BE_REPLACED

One of the biggest sources of confusion about the Liberal decision to buy 18 Super Hornets is that it is an interim buy.  What does that mean? 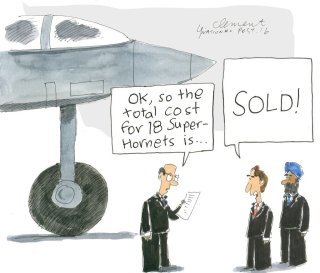 It means that the planes are only being bought to cover a specific period of time–whenever they arrive to whenever the next batch of planes is ready to go.  And then the government of Canada is obligated to, yes, get rid of the planes.

END_OF_DOCUMENT_TOKEN_TO_BE_REPLACED

I was not thrilled with the rollout of the new decision regarding the next Fighter for the Royal Canadian Air Force.  Turns out that the Canadian government was not entirely thrilled with my take, so I got to chat with someone who sought to clarify the decision to decide eventually while buying some interim planes.  I cannot identify my source, but, like the Lockheed and General Dynamics folks I have chatted with in the past, they know these files far better than I do.  My research is neither on these systems nor on defence procurement, so take everything I say with a grain of salt.

END_OF_DOCUMENT_TOKEN_TO_BE_REPLACED

I am mighty pleased that the first piece of the Phil/Dave/Steve project on legislatures and oversight over the armed forces of the world’s democracies is now published: “Public critic or secretive monitor: party objectives and legislative oversight of the military in Canada.”  The big question, of course, is how did a paper on Canada get into West European Politics?  The answer: tis part of a special issue on executive-legislative relations and foreign/defence policy.

Our entire SSHRC-funded project started with me being puzzled, driven by my growing up in the US: what do you mean, the defence committees of the Canadian Parliament do not have security clearances?  That they cannot see the secret stuff and ask generals/admirals about operations?  If the legislators don’t have access to classified info, then how can they hold the executive to account?  Information is EVERYTHING in principal-agency theory–that information asymmetries mean that agents can do more or less than what the principals desire.  Usually, principals try to figure out ways to overcome the asymmetry, but in Canada, not so much.  So, the paper ponders why parliamentarians would prefer to be a public critic (ignorant critic) rather than secretive monitor (informed overseer).

The answer focuses on how institutions and party politics focus parliamentarians not in good governance but on point-scoring.  We use the Afghanistan detainee controversy to figure out this puzzle, ultimately realizing that politicians doing oversight behind closed doors get little political advantage while shouting in parliament, with or without good info, is viewed as better for the next election.

Why is this relevant today?  The Liberals came into power seeking to create some oversight over the secret stuff, giving some parliamentarians some access to the secrets.  However, this new body does not really fix the problem that we identify (our comparative project aims to understand not just the attitudes towards oversight but the effects of different forms, so perhaps Canada is not so problematic).  Why not?  First, as Phil has written elsewhere, it is not a parliamentary committee–the real principal for this new committee is not the Canadian Parliament but the Prime Minister who can restrict access to information quite easily.  Second, the focus of the entire discussion has been on surveillance/intel and not on military operations.  This body is not going to be overseeing the Canadian Armed Forces, so the only elected officials in Canada that have any clue about what secret stuff the CAF is doing are the Prime Minister and Defence Minister.

Living in Canada made me realize that not every country has multiple Armed Services Committees who are tasked by the greater legislative body to oversee the deployment of the armed forces.  Indeed, it may be that the US is very exceptional (and Congressional oversight may be lacking these days due to polarization, with show trials like the Benghazi hearings replacing real oversight).  Yes, other countries have legislatures that can and do vote about whether to deploy or not, but the question for us is: what next?  Do these bodies follow through and see that their intent, their limitations, their caveats are adhered to?  Not so sure, so the work continues.

Many people are asking the right questions about the much ballyhooed next Canadian military deployment, including where and whether there will be a vote or not.  The problem is that we are getting the questions in the wrong order, which is creating more confusion.  We cannot ask some questions until we know the answers to the others.  The vote question should be after we know much more about the mission.  The where question actually is not first either.  So, here is the correct order of questions:

END_OF_DOCUMENT_TOKEN_TO_BE_REPLACED

Today, the Centre for Security, Intelligence and Defence Studies at NPSIA along with the Conference of Defence Associations Institute and the Centre for International Policy Studies (Queens) held a workshop that involved much of the Canadian defence academic community.  The idea was to feed into the Defence Review Canada is running this summer.

Andrea Charron, our Centre’s director, did a great job of organizing so that the day was very engaging.  We were split into four groups: threat environment, the forces, readiness, and missions/allies.  Each group was tasked to come up with five ideas/priorities.  Then each group would Red Team (criticize, respond/react) to two of the other groups.  My group was Missions/Allies led by Andrea C and Jim Fergusson.   This group included Sjrdjan Vucetic and Thomas Juneau of U of Ottawa, Justin Massie of UQAM, Theo McLauchlin of U of Montreal, and Kim Richard Nossal of Queens.

I really didn’t know what I was going to say going into the event, as I had never done something like this before (of course, anyone who knows me would have predicted that I would talk alot).  Also, the missions for Canada are pretty established–that we will not be changing what Canada is likely to think its role is in the world: defending Canada, jointly via NORAD with US, NATO, UN, and occasional coalitions of the willing ops.  We did come up with a bunch of questions that one should always ask when considering a mission–what are the rules of engagement, who is involved, what are the desired goals, etc.  Kind of akin to the Dutch’s Article 101 letter procedure (see the Dave and Steve book).

The big point I pushed was that the classic Canadian question of whether to provide small units in many operations or concentrate in one place for extended period of time should be resolved thusly: do the latter.  If you want to make a difference, concentrate the effort and be patient.

The challenge for any review is that there is not much room to move Canada. That is, the budget is mostly set, 47% is dedicated to personnel, the big procurement decisions are decided/have a process of their own, AND Canada faces few threats and has limited capabilities.  So, neither our review nor the big government one can really alter the path of the CAF and DND much.  Still, it was a very useful exercise for thinking about this stuff and giving input to government.

Personally, it was mighty good for me both because I could connect with the many folks I know who attended and help set the stage for one of my major sabbatical priorities: applying for a partnership grant to create a Canadian Defence Research Network so that we can meet more often, develop shared research agendas, communicate our results and train the next generation of defence scholars. 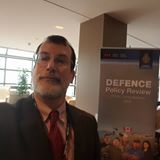 I got the chance to participate in the Defence Review via a roundtable in Montreal.  Since I pooped all over the project when it was first announced, I have to say that I am both impressed and thankful that the Minister of Defence and his staff invited me to join the process.  That was mighty big of them.

The meeting was governed by Chatham House Rule, which means I cannot attribute stuff to anyone.  So, I will apply Saideman House Rule–I will describe the event and then say what I said.